Embalse de Yeso is an artificial dam with a beautiful alpine-style lake at 2560 m, and the road leading to it is a very worthwhile place to check the medium and high altitude plants. Unfortunately, it is not a protected area, so the area is under heavy assault by heards of goats which inflict serious damage to the vegetation, especially in the lower reaches of the valley. 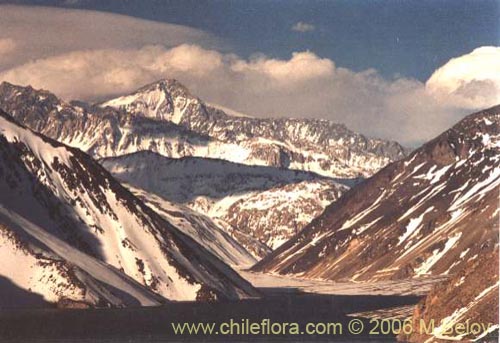 To get there you would have to drive on the paved road to San Gabriel, then continue on the main dirt road for another 2 km. and then turn left (there is a small traffic sign to that effect). This is the beginning of the road to Embalse de Yeso and from there on you can not really get lost.

There are several "hot spots" on the road to observe the plants. Just one km. past the bifurcation, one will be able to see shrubs of Berberis chilensis var. chilensis and the Colletia hysterix; Puya berteroniana grows on rocky slopes in the same area.

The seond place to check out is located at about 4 km. from the bifurcation where the road crosses a small ravine with a small waterfall (to your right). There you might observe several typical lower-altitude plants: Viguiera revoluta, Baccharis, Fabiana imbricata (Pichi-romero) the leaves of which are used to prepare a herbal tea and Kageneckia oblonga (Bollén), the last one with medicinal properties and supposedly good for hair-loss. On the way to San Gabriel there is even a shop that sells a shampoo based on the extract of this plant. 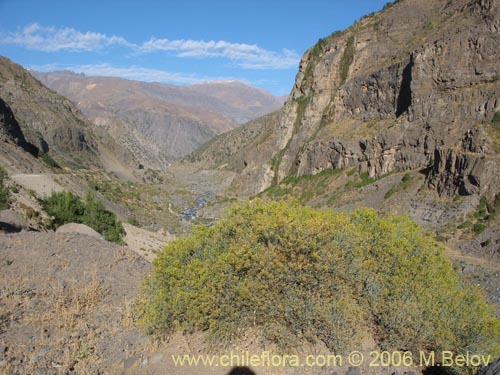 Further up, after a more or less straight stretch of road, and after passing a quarry, the road begins to climb in zigzag and that may be another good place to stop and observe the vegetation. Kageneckia oblonga gives way to Kageneckia angustifolia, a very hardy tree which, together with Schinus montanus, forms the upper limit of the sparse bush forest in the area. Several interesting annual species can also be seen here: Schizanthus hookerii and Scyphanthus elegans. New species of shrubs also appear: the very aromatic Gymnophyton isatidicarpum (bío-bío), and Tetraglochin alatum (horizonte) which in summer is covered with white-reddish seeds which give it appearance of a blooming shrub. Some big cacti of Echinopsis chiloensis can also be seen; many are affected by a parasite plant, Tristerix aphyllus, which blooms with brightly-colored red flowers all year long and provides staple food for the collibries; the red sticky fruits are then dispersed by other birds. 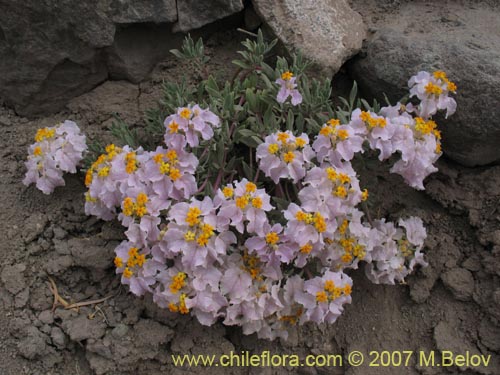 When the road begins to descend slightly after turning right and you have a nice view ahead (some 12 km. from the beginning of the road), watch out for the very beautiful Cruckshanksia hymenodon var. hymenodon on the slopes. It has bluish-white flowers and the plants are sprinkled all over the uphill side some 5 – 10 meters from the road. They reappear some 500 meter further down the road and if lucky, you will be also able to see one of the most beautiful Chilean calceolarias: Calceolaria purpurea; as its name suggests it has purple flowers, and there are just a couple of species out of more than 50 which have this color. It is located some 100 meters before another brook with permanent water. Here you might as well step out of the car and examine the hydrophile plants, starting with the shrubs of Escallonia myrtoidea (lun), as it is called in Chile. That name “lun” always perplexed me in the past. Monday in Spanish is “lunes,” and I always have wondered why so many small high mountain valleys are called “los lunes,” which, when literally translated means The Mondays. In my mind I made up strange stories of lazy horsemen who stayed at these places after drinking all Saturday and Sunday (not such a rare occurrence here) ... Well, it turned out to be that “los lunes” are much less romantic, meaning simply the escallonia trees... 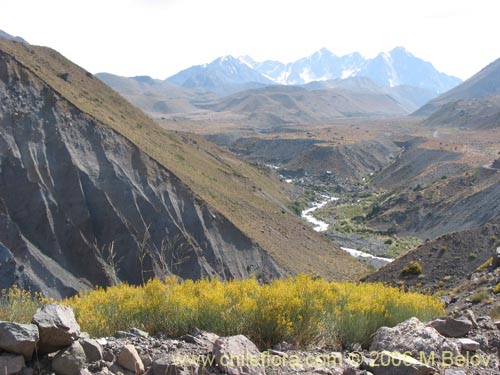 First sight of the the mountains which surround the Yeso Lake (in the distance).

Another stop before reaching the dam is the open plain at about 2200 m. which is a typical example of steppe vegetation - with such plants as Chuquiraga oppositifolia, Mutisia subulata, Euphorbias, Nardophyllum lanatum. Loasa pallida is also quite common here. Continuing on, the road becomes much narrower, with steep slope on the right. Watch out there for

Alstroemeria pallida which is rather dispersed and can be spotted only when in bloom, and for the first brushes of Mutisia sinuata and Malesherbia linearifolia.

The road continues straight and soon reaches empty military barracks and a small hamlet of 5 - 6 houses for the dam personnel. Just before reaching them on the right side there is a field where one can find scattered Rhodophiala rhodolirion.

Here the road turns left and begins its last climb before reaching the dam lake, and from here on the best part of vegetation can be seen: highlights of ornamental plant are: Alstroemeria umbellata, a low plant with pink flowers, Caiophora coronata, belonging to the Loasaceae family endemic to South American continent and which has big bell-shaped white flowers which resembles a crown, hence its name. This species is very adaptable, and it grows from extreme north to Santiago, at altitudes from 2000 m all the way up to 5000 m. This species begins to appear on the stretch midway through the lake and further up for the next 15 kilometers, up to the entrance to the Termas del Plomo Hot Springs. Calycera herbacea with its strange-looking flowers protected by long sharp needles has about the same distribution in this area. Although the slopes bordering the lake are very dry, there is one spot (about 2 km. from the Dam) where hydrophile species can be seen: there is a small, but very dense population of Gentianella ottonis and in several spots you would be able to see the Calceolaria arachnoidea. Several other calceolarias are also present, like Calceolaria hypericina. At about 4 km. from the Dam, where the road enters a much flatter area, there are abundant shrubs of Berberis empetrifolia. This berberis is one of the most prolific berberis species, and one shrub may give you as much as 1 kg of bluish fruits rich in anti-oxidants. Well, and if you are concerned about health, you may as well try out the Ephedra chilensis in the same area. It s white fruits are very sweet, and they said to hepl loose weight. Finally, do not forget to check out the enormous population of Tropaeolum polyphyllum on the right slope just before reaching the farther end of the lake. It may difficult to climb the steep, sandy slope, but very worthwhile to do so – there you will find this and many other plants, Alstroemeria umbellata, Calycera herbacea, Schizopetalon, Astragalus cruckshanksii, Mutisia sinuata. 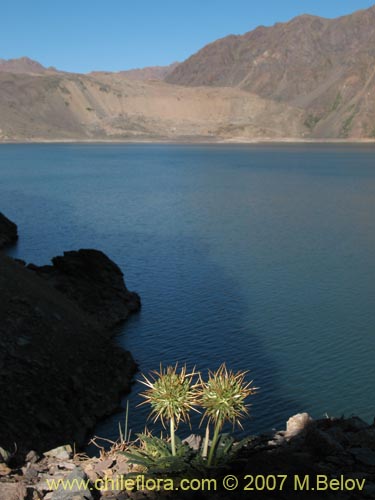 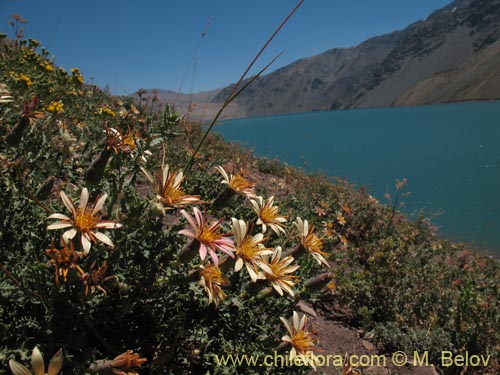 Further on, when the lake terminates, the road continues without much of a change in altitude, and the vegetation becomes much less interesting. There are a couple of Adesmias, Senecio, Laretia acaulis, Acaena sericea. In some spots, especially near the bridge which crosses the river, you may see again Caiophora coronata. The next stop would be about 10 km. from the end of the lake, where the road divides, to the left you will have the entrance to the Gypsum mine, and straight you will run into the entrance to the Termas del Plomo Hot Springs. 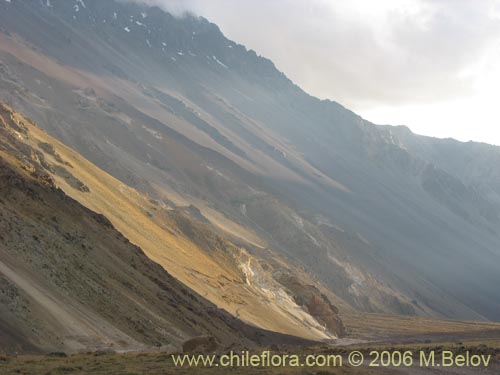 A view towards the southern shore of the Yeso Dam Lake.