Choshuenco National Reserve offers a combination of Valdivian forest, Nothofagus forest, and High alpine vegetation. The road which leads to this reserve climbs from about 200 m. to 1200 m. in about 12 km., crossing in this way all types of vegetation.

This area is very worthwhile to visit, although it is somewhat off the beaten track. It is possible to get there either from Coñaripe or from Panguipulli. Waring: some maps show a route from Los Lagos to Riñihue and then bordering the Riñihue lake to Enco (the starting point for the road to the Volcano. This road is cut off because of a fallen bridge which has not yet been repaired (September 2006) and apparently there are no plans to repair it. The fastest way to get to Choshuenco Volcano is from Panguipulli (to Choshuenco village). From there one should drive to Enco, a trip of about 15 km.

There is another route to Choshuenco volcano which starts from the road to Fuy; there you can visit the Neltume waterfall. However, the entry to Choshuenco from this side is heavily controlled and an exhorbitant rate of about 25 USD (2006) is charged to enter the area. Please note that all National Parks charge about 3-5 USD. 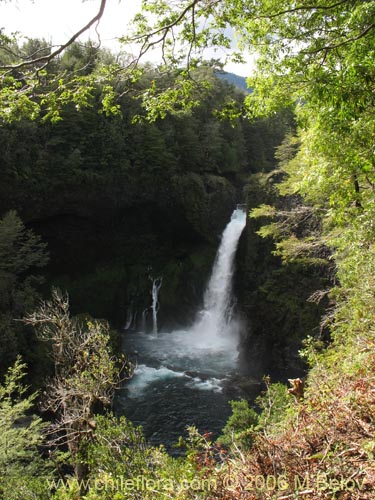 Waterfall of Neltume, interesting but nothing special

We have checked several areas around this location (road from Choshuenco to Coñaripe, Coñaripe to the border (towards Junin de los Andes in Argentina), Puerto Fuy and Neltume, but unfortunately, despite the very scenic nature of many of these places, especially the Neltume waterfalls, Puerto Fuy, and road bordering the Neltume lake, neither of these presents interesting and varied vegetation worth a special trip: so either you go all the way to Choshuenco or you do not go at all. Most of the areas around the roads up to Choshuenco village bear signs of human intervention and for the most part you would see pasture fields with woods further up the hill slopes with restricted accesses because of the fences. 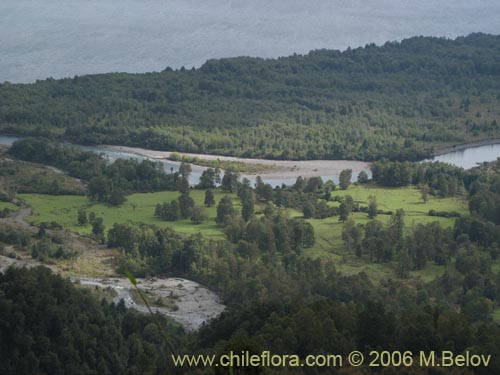 View of the Enco

On the road from the Choshuenco Village to Enco the situation changes dramatically, because one enters virgin temperate forest. It is really a treasure trove of native plants: In addition to the standard set of bigger trees like Nothofagus dombeyi, Nothofagus obliqua, the forest undergrowth has an abundance of Luzuriaga radicans and the somewhat less frequent Luzuriaga polyphylla which grow on tree trunks and sprinkle the wood with orange fruits in March, very difficult to miss. Long branches of Pseudopanax valdiviensis hang from the cliffs on the roadside. Gaultheria pumila competes with Ugni molinae and at the beginning of the autumn the roadsides are white and red with the fruits of these edible plants. Close to Enco there is an access (on foot and quite difficult to find) to the Riñihue river, and on its shores many other species can be found. Because of the high humidity, it is a heaven for mushrooms; of the edible mushrooms you almost certainly will see Flammulina velutipes. 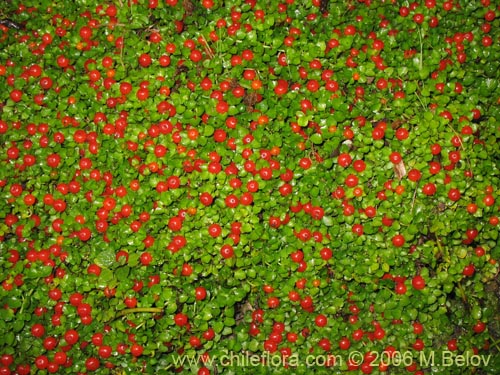 Once at the end of the road at Enco (just a few houses) one has to turn left (there is a sign). The road was cut off about 100 m. from the turn (as of 2006), so that one has to drive through a gate, cross a brook and then continue on the same road up. After passing a plantation of old trees one enters a virgin forest. The road winds slowly up the slope in long streteches with native vegetation all around one. Of the more interesting species worth mentioning there are Lomatia ferruginea, which is studded with red flowers when in bloom, Fascicularia bicolor, a rather big epiphyte bromelia which grows on tree trunks and can reach up to one meter in diameter, with beautiful blue-colored flowers and reddish leaves, the wet and damp places are covered with a carpet of Nertera granadensis, which is evenly sprinkled with bright red fruits, and several species of ferns hanging down from the uphill side of the road. 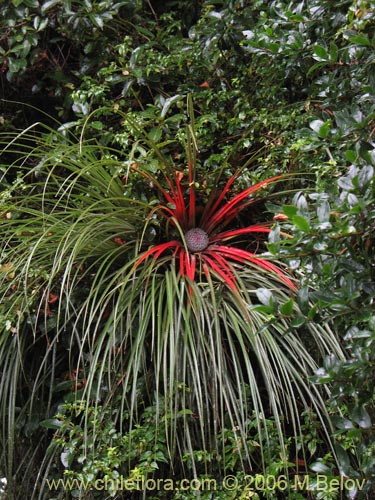 Further up, at an altitude of around 800 m. the road enters forest with huge Nothofagus dombeyi trees with trunks measuring more than 3 meters in diameter. One species worth mentionning is the Asteranthera ovata, a vine which covers the humid base of the trunks with beautiful red flowers. 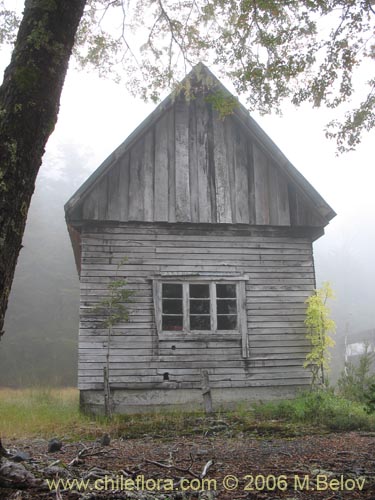 The road reaches a pass at around 1000 meters and begins a slow descent towards a brook flowing in the valley. Alstroemeria aurea, a quite common plant, will greet you with yellow flowers all over the place. This area is very eerie and strange – there are abandonned houses and installations, which in the past were part of some fundo, and now the ghosts of the past are haunting the lone visitors like me who dare to make this trip alone. In the autumn fog, which is quite common here and which hides from one the unseen terror, the strange feeling of something sinister becomes even stranger. 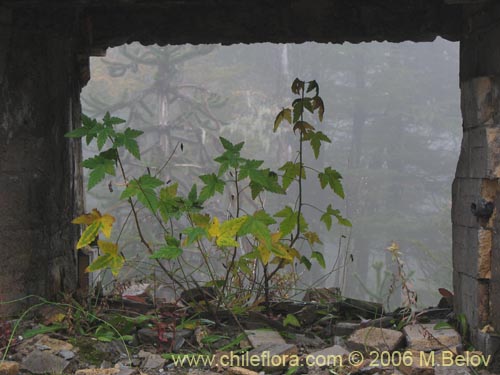 Plant growing inside what used to be an oven

There is an easy crossing of the shallow river (with an alternative foot bridge over a sturdy log) and on the other side there was a big club house. I called, but no one answered. I pushed on the door, but it was locked; through the glass pane one could see that it was orderly and apparenly inhabited inside. After trying for several minutes to get the attention of the vanished inhabitants I continued on the road which now became very bad, with rocks all over, and ressembled more a trail. After a quarter of an hour and one kilometer of struggling I had finally to abandon the car, because deep ravines (2 m.) left no chance for further progress. Just a few years eroded the road which was leading to a ski resort. 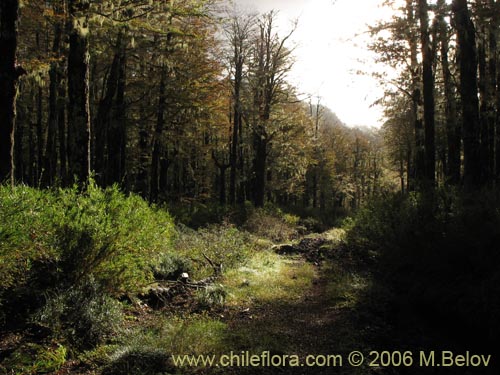 I continued on foot through this strange, low Nothofagus forest. There were almost no leaves around, many dead trees, all tree trunks were covered with green-grayish lichens which hang everywhere and which combine well with the greyish fog above. On the side of the road thick undergrowth could be hiding anything. It consisted mainly of pigmy canelo Drimys andina and a high altitude myrtle shrub (Myrceugenia chrysocarpa). And dead silence all around. 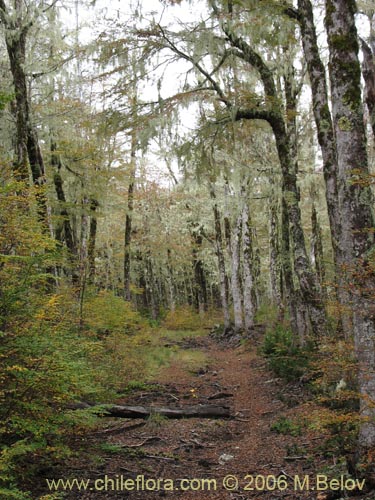 After some two kilometers the road suddenly plunged out of the wood into an open field. The heavy feeling receded somewhat and the high-mountain notro Embothrium coccineum fma. andina and compact shrubs of Ovidia andina intermingled with Drimys shrubs. Further up one could see the rests of the cables and posts of the ski-lifts. All rusty, abandonned, with wooden shacks for the motors all warped and falling apart.

In a better weather and with more time to spare one can climb up the hills to get a close view of the Choshuenco volcano with its glaciers, and to find more andean vegetation. For me this was the end point. I had just one hour of light left.

The descent to the car was quick, the sun began to shine through some openings in the thick clooud cover, turning the grey into yellow, which stood out on the deep blue sky, something like a dog puppy was whining somewhere... dogs? What are they doing here?

When returning and beginning the climb to the pass, I looked back and examined once more that strange three-stored club house... suddenly I spotted in one of the windows a figure which was staring at me. I stopped with a jerk. He must have been looking at me during all that time that I took to cross back the river... The figure did not move. I rolled down my window. The figure was staring. I waved my hand. The figure seemed like a ghost. The figure waved back. I put the car into gear and continued. Was it a lone forest ranger or something much further from beyond? I will never know it. The radio antena mounted on the top of the roof of the house makes me think that in the end he was a simple mortal. Maybe he had the same strange thoughts about me and my modern Flying Dutchman of a Chevrolet Trouper which was dissolving in the all-engulfing fog out of his view... 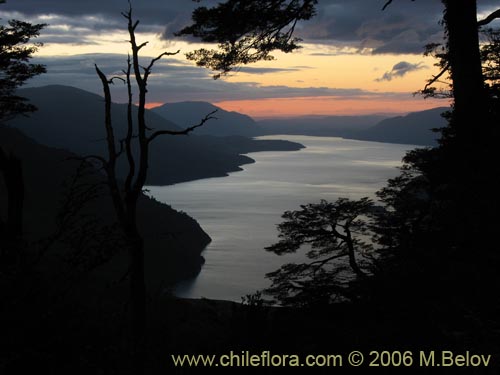 Sunset over the Riñihue Lake