Llanos de Challe National Park and the surrounding areas have a very rich flora. Unfortunately, it is usually dormant, and to see it in its full splendor you must be lucky to visit the place when there is the so-called blooming desert, a phenomen which occurs every couple of years, usually in the period between August and October. And with global warming these incidents of precipatations which cause it become more and more rare...

This location is a purely "drive-by" site, because the distances are large and the plants are scattered. One can reach it from Vallenar either through Huasco and then following the coastal road north or one can drive north for about 18 km. from Vallenar on the Panamerican Highway and then turn left (the exit is well-marked). Finally, if you are coming from the north (Caldera), there is a new and very good unpaved road going south from Caldera close to the shore and it takes you to the Park through Totoralillo and Carizalillo.

Although the Park covers a relatively small area of roughly 15 x 15 km, there are many interesting spots worth visiting, and most of them are outside the Park. If you come from Vallenar, you should probably take the approach to the Park from the east. After turning off from the Panamerican Highway towards the coast, the road will run across a flat plain. There are few showy plants along the road, but the ones you can always see are the shrubs of Heliotropium. There are several species in the area and all of them are endemic. First species to appear are the low Heliotropium myosotifolium, which measure about 30 cm. When you get closer to the park, after passing a small “village” of Buena Aventura, several other Heliotropium species will appear, Heliotropium filifolium, Heliotropium sinuatum, and Heliotropium megalanthum. The first of these is a big shrub of about 2 m. and in a rainy year it is all covered with white flowers. Heliotropium sinuatum is a very scented shrub, also about 2 m. high, and the leaves of which are extremely sticky. Heliotropium megalanthum, a compact, low shrub of only 20 cm., is not to be found directly on the sides of the main road, but if you take the road to Mina Farellones, a side trip of about 10 km., you will run into this species just 1 km. off the intersection. There is one final species, found very close to the sea, Heliotropium floridum. 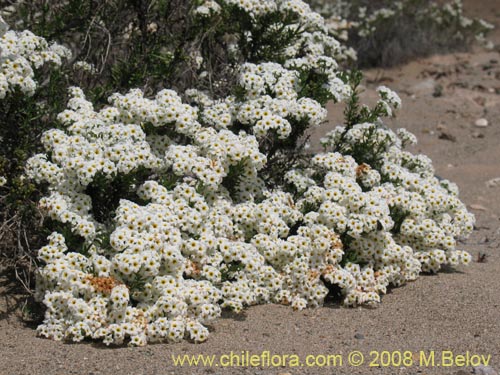 If you are lucky and visit the place during the blooming desert, apart from Heliotropiums, you are bound to run early into your trip into fields of yellow Rhodophiala bagnoldii, which extend for dozens of kilometers, sprinkled with enclaves of Leucocoryne appendiculata, several species of annual Nolanas, and Cistanthe longiscapa, one of the most important species of the Blooming Desert. This latter annual species may be so numerous that the red fields can be seen from space in a rainy year. Just go a take a look at Google Earth with the following coordinates: 27°58'56.73"S, 70°33'0.44"O! Rhodophiala bagnoldii plants are not as dense, but when looking across the field of yellow flowers still very impressive. 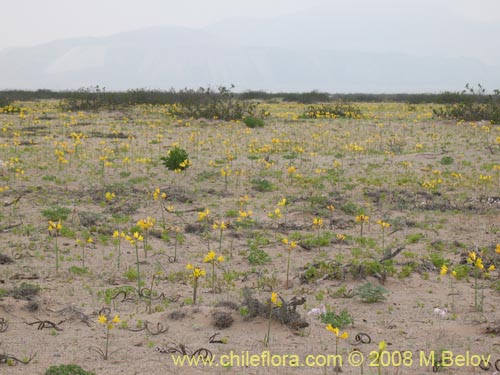 A Field of Yellow Añañucas

Further down the valley, some 10 km after passing “Buena Ventura,” which in reality is slightly more then a simple road sign, one enters the Llanos de Challe National Park. Very suddenly, the surrounding atmosphere changes, the valley becomes narrower, and on its sides new species of cacti begin to appear, both larger sized-ones, like Copiapoa dealbata, as well as smaller species, and it is worthwhile to do some exploring on the slopes of the valley in search of other species of cacti. In the washes along the dry riverbed there are many succulent and drought-resistant species. And while looking for interesting plants, do not forget to watch out for the roaming guanacos, which are quite frequent here.

There are several lateral trails (easily drivable in a 4x4) worth a short visit. Just a few hundred meters aways from the main road you will be able to see Aristolochia chilensis, a strange-looking plant which may make you think that it could be an insectivorous species due to the special form of its flowers and the foul smell it exudes, but apparently it is not, although some insects do get trapped inside and die. There are also the beautiful Cruckshanksia hymenodon var. hymenodon plants, and if you come at the right time, around the beginning of November, you may find an occasional Leontochir ovallei. It has beautiful red flowers, although very rarely the flowers can be yellow or grey. The species belongs to the Alstroemeriaceae family and it has extremely narrow distribution range – it grows inside a half-circle with a radius of about 25 km., centered roughly around Carrizal Bajo, but there is a circular exclusion zone with a radius of about 10 km. from Carrizal Bajo... Well, in simple terms, it means that its habitat is very small, and that it is very probable that the local population of the village contributed to its disappearance in the immediate vicinity of the village. The flowers of Leontochir ovallei, when cut, do not wither for a long time due to the fleshy leaves which retain water and keep the flowers alive. That is probably the reason why these flowers are so popular here and are placed on tombs on All Saints' Day (1st of November). 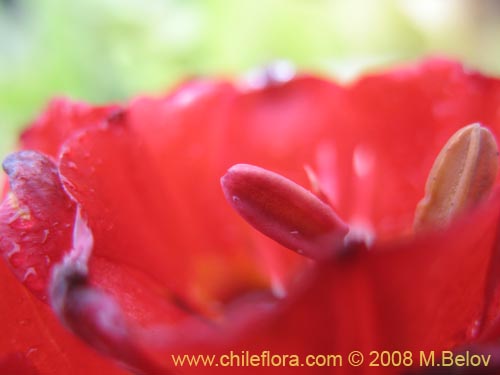 Continuing down, one finally arrives at a crossroad: to the right (north) the road leads to Carrizal Bajo, and to the left the road will take you to the coastal section of Llanos de Challe National Park.

The area north from Carrizal Bajo (about 5 - 8 km.) is certainly worth a short detour: Recently (2006), a new unpaved, but very good-quality road from Carrizal Bajo to Caldera was constructed, and if you are going north and visit the area of Llanos de Challe, it is much more interesting to continue on this new coastal road rather then back-tracking to Panamericana Highway and driving north through Copiapo. If you follow that road north, there is a narrow ravine at about 4 km. from Carrizal Bajo full of interesting species, including Leontochir ovallei. The dominant species here is Copiapoa dealbata, and in some places these plants get so dense that one can hardly walk around them. Another very interesting place to visit is a short lateral road (crossroad is located at 27°59'31.20"S 71° 7'38.04"O) about 10 km. north from Carrizal bajo which goes down to the ocean along a very narrow valley. There you will find Nicotiana solanifolia, and at the very end, just a few meters from the shore, Leontochir ovallei. On the main road in a rainy year, fields of Rhodophiala bagnoldii will alternate with Zephyra elegans, although here the blooming period of the Rhodophiala is usually later by one month compared to more interior areas (due to cooler weather because of the Pacific Ocean).

The coastal section of Llanos de Challe National Park is also very interesting, and virtually all species can be seen within a few couple of meters from the road. One of the most beautiful genuses of the north are Nolanas, and here one can find several species, Nolana ramosissima, Nolana rupicola (in the rock crevasses just off the road) and others. 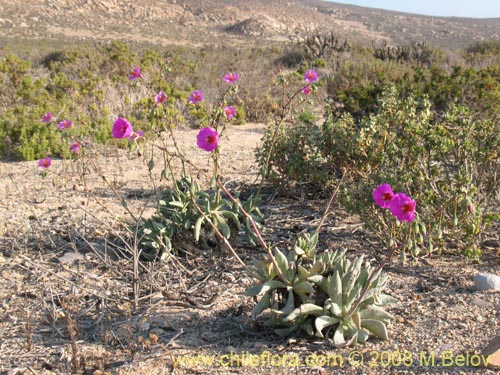 A few hundred meters north from the park ranger cabin there is an area where the water is retained during the rare rain, and there are more species to be found, including the large Nicotiana solanifolia which has big green flowers.